“Star Routes” got it’s name because legislation establishing the new mail service called for contractors to carry the mail with “celerity, certainty, and security.” Weary of repeatedly writing these words in ledgers, postal clerks substituted three asterisks “* * *” and the phrase “Star Route” was born. “Star Routes” was renamed “Highway Contract Routes” in 1970, but they are still known by their original name today.

The contract mail route to the Havasupai IndianReservation, far below the rim of the Grand Canyon, is the last mule train delivery in the United States.

Post riders on horseback were the first contractors to carry mail between Post Offices. In 1773, post road surveyor, Hugh Finlay, noted that a stagecoach driver held a contract to carry semi-weekly mail between Portsmouth, New Hampshire, and Boston, Massachusetts. In 1785, the Continental Congress authorized the Postmaster General to award mail transportation contracts to stagecoach operators, in effect subsidizing public travel and commerce with postal funds. Despite their higher costs and sometimes lower efficiency, stagecoach proposals were preferred over horseback.

An Act of March 3, 1845, took steps to reduce mail transportation costs. Congress abandoned its preference for stagecoaches, with contracts to be awarded to the lowest bidder for what “may be necessary to provide for the due celerity, certainty and security of such transportation.” 1 These were known as “celerity, certainty and security” bids. Postal clerks shortened the phrase to three asterisks or stars (***). The bids became known as star bids, and the routes became known as star routes.

Still, throughout the 1850s, the Department continued to favor stagecoaches over horses on certain routes. In 1852, Postmaster General Samuel D. Hubbard instructed contract bidders to state the type of conveyance “if a higher mode than horseback be intended,” noting that stagecoaches were preferred on certain routes.2

Postmaster General Joseph Holt’s 1850 Annual Report criticized the “enormous sums” paid to stagecoach companies to transport mails, “some of which [were] so light as scarcely to yield a revenue sufficient to defray the expense of carrying them on horseback.” He declared, “In advertising for the new lettings, ‘Star Bids’…will alone be invited…without any designation of modes of conveyance.3″ The 1860 Annual Report is the last to discrimintate between “coach” and “inferior” modes of service. 4

Contractors had to be at least 16 years old until 1902, when the age limit was raised to 21. Subcontractors or carriers could be 16. Contractors were bonded and took an oath of office; subcontractors and carriers also took the oath.

From 1802 to 1850, postal laws required carriers to be free white persons. Violators were fined. The typical four-year contract did not provide payment for missed trips, regardless of weather conditions. Unexcused service failures could result in fines up to three times the trip’s price.

Regular schedules made carriers easy targets for thieves. Criminal punishment was harsh. Anyone found guilty of robbing carriers could receive five to ten years of hard labor for the first offense and death for the second. Meanwhile, some carriers faced the hazards of snow, avalanches, ice packs, cliff-hugging roads, seas of mud, and dangerous waters.

Contractors provided their own equipment. A 1930s-era Post Office Deparment memo quotes Harry Elfers, who transported mail ten miles from Sandusky, Ohio, to Kelleys Island in Lake Erie. In bad weather, he would sail from the island to Marblehead, the closest mainland point, only four miles away. That route could take 20 minutes to 8 hours, depending on the weather. Either way, his pay was the same. Elfers recalled the specialized equipment he used:

“When I was a youngster I was out in a boat about all the time. Now I don’t care for ordinary sailing but battling with the ice has a fascination for me. An “ironclad” is a flat-bottomed skiff. There’s a sail in the bow to carry us through the water or over the ice when conditions are right. There are two iron-shod runners on the bottom so the boat may be used as a sled. The sides are sheathed with galvanized iron. This is very important, because thin ice will cut a boat like a knife.5″

Most star route carriers traveled by horse or horse-drawn vehicle until the early 20th century.  Boats, sleds, snowshoes, and skiffs were also used. Today’s contractors use trucks, tractor trailers, and automobiles or whatever it takes — mule trains into the Grand Canyon, flat bottomed pole boats in the Louisiana bayous, and airplanes and hovercraft in Alaska. Dog sleds were used in Alaska until 1963. Today, mail is dropped by parachute on some Alaskan routes. During the winter, snowmobiles carry mail in the highlands of Utah, Colorado, and Montana. 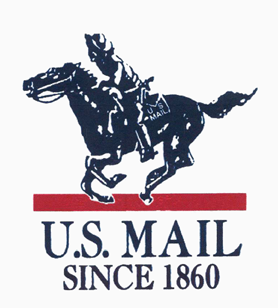 In The Story of Our Post Office, Marshall Cushing writes about Mrs. Clara Carter, who, while carrying mail between Maine’s West Ellsworth and Ellsworth Post Offices around 1892, also delivered mail to customers on the route. 6 Such unofficial arrangements were formalized beginning July 1, 1900, when some contracts provided for delivery to and collection from rural mail boxes erected along the routes. By 1918, some contracts also permitted the sale of stamps, money orders, and registered mail along routes.

In 1948, Congress allowed the Postmaster General to renew four-year contracts with satisfactory service providers, rather than award a new contract to the lowest acceptable bidder to prevent the many contract failures resulting from speculators who underbid tried-and-true carriers by just a few dollars. Congressman Thomas J. Murray of Tennessee explained:

“I think when a star-route contractor has carried the mail for 20 to 25 years… it is unjust and unfair for him to be deprived of his contract for another 4-year term by cut-throat bidding.7″

Star routes declined in the 1950s as unnecessary and duplicate service was eliminated. However, the 1960s saw growth as the Highway Act of 1958 improved highways while rail service declined. Between 1960 and 1970, star route miles more than doubled. In the 1970s, star routes officially became known as highway contract routes, although popular usage of the older term continues.

At the end of 2006, the Postal Service had 16,707 highway contract routes. About 45 percent of these provided delivery to customers along the routes. 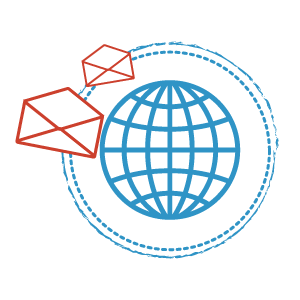 "Neither snow nor rain nor heat nor gloom of night stays these couriers from the swift completion of their appointed rounds."

TNStumpff is a Secure Site and we take protecting your information very seriously. When applicants apply on our website, they can rest assured that this is a highly secured site. No information will be sold or used for any other purpose.